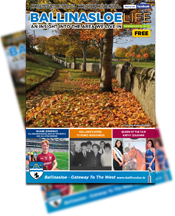 Ballinasloe Life Mag
Ballinasloe is the largest town in County Galway after Galway City, and is a prosperous and expanding commercial/industrial centre for East Galway.  The 2011 census put the population at just over 6,000.

The town is within easy access of other major regional centres. It serves as a central base for tourists, offering great accommodation and a host of leisure pursuits, including coarse angling, boating, shooting, golf, horse-riding and a marina.

Pubs in Ballinasloe are famous for their warm welcome, diversity and live music.

There is also a large range of restaurants in the town. Although Ballinasloe is most famous for being the birthplace of Supermacs there is a restaurant to suit every palate. From Indian to mouthwatering Irish steak.
The town derives its name from the ford of the River Suck near the old Norman castle at River Street, which became a meeting place for the hostings of the Connacht tribesmen, chiefs and warriors of Breifne and Meath. The ford became known as 'Beal Atha na Sluaigheadh' meaning the 'mouth of the ford of Hostings'.

Ballinasloe is steeped in history, and has been lauded for the architectural character of its fine streetscapes.  It is also famous for its limestone which was used in many public buildings in the town as well as several important buildings nationally and internationally. The most recent example of note is Galway County Council's Civic Offices in Prospect Hill, Galway City, which were completed in 1999.

Every October, Ballinasloe is host to the ancient annual October Fair. Chiefly agricultural in the past, it is now focused on the horse. The Ballinasloe Fair is one of the oldest horse fairs in Europe; bathed in history it dates back to the 18th century. Today the ever popular fair is still held, along with a festival that attracts up to 100,000 visitors from all over the world.