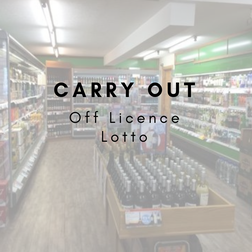 Willie & Anne Divilly started their business life in Ballinasloe in 1955, when they opened a grocery store in a rented shop in Dunlo Street. Anne Geraghty was a Ballinasloe native, sister of well-known Councillor Patsy Geraghty, and their other sister Margaret was a talented local seamstress. Willie and Anne were 11 years in the rented shop, when the opportunity arose to purchase O’Connor’s Bar and Grocery across the road in Dunlo Street. They opened the first supermarket in Ballinasloe, and joined the Niland group trading as VG for many years before becoming independent and trading as Divillys.

When her husband passed away in 1984, Anne, with the support of her four children Mairead, Dominic, Aine and Regina, continued to run the business. In response to the advent of home drinking, the family took the decision to change to trading as an independent Off Licence. In 2009, they joined the Carryout Group and the business continued to prosper with the support of many loyal customers.

The Carryout Franchise is owned by The Barry Group from Cork and has over 100 stores nationwide. They provide a pricing structure to help compete with the multiples, and have an excellent marketing service and nationwide presence. Celebrating the shop’s 10 year anniversary will be Carryout Brand Ambassador Brent Pope, who will be in store on Thursday 15th August from 5pm to 7pm, with lots of specials on the day.

Nowadays, the business is run by Regina Divilly, who is ably assisted by Michael Keighery and June Hurley, as well as Kathy Walsh. Regina took over the running of the shop when her mother passed away in 2004.